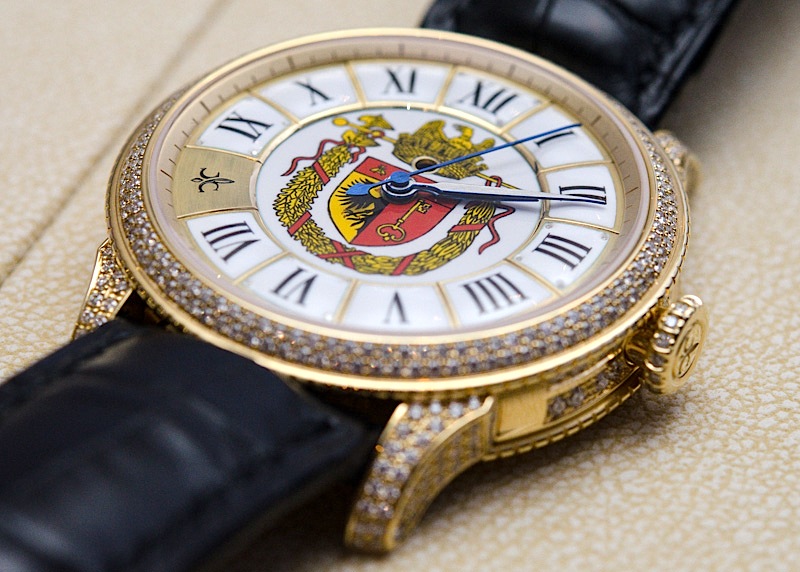 I can’t really think of another time when I found a 3:40 am wake-up feel any easier than it did just a couple of days ago. On this cold Budapest morning I got up as fresh as scarcely ever before, checked all my gear one last time – laptop, camera, chargers, lenses, flash, memory cards, batteries – and finally set off to have what I would call “my first watch exhibition experience.” My destination was the 2013 SalonQP fine watch exhibition, held between the 7th and 9th of November, in the Saatchi Gallery in the fabulous city of London. Saying that I was excited would be a massive understatement. Although I was familiar with this annual event – we at aBlogtoWatch have covered it several times – the thought of seeing so many special watches “in the metal,” at the same place, at the same time had me counting down the days and weeks before the event started. 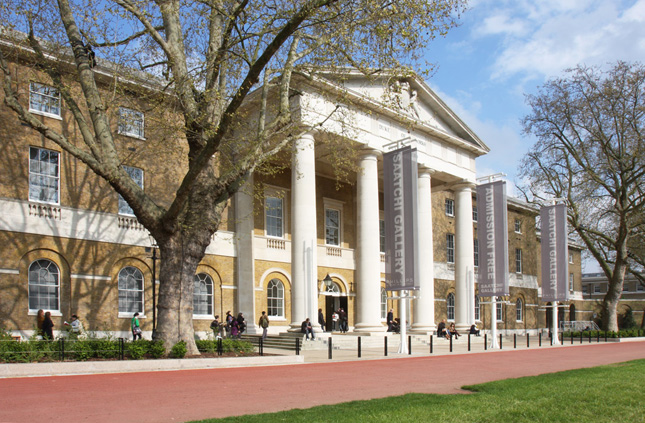 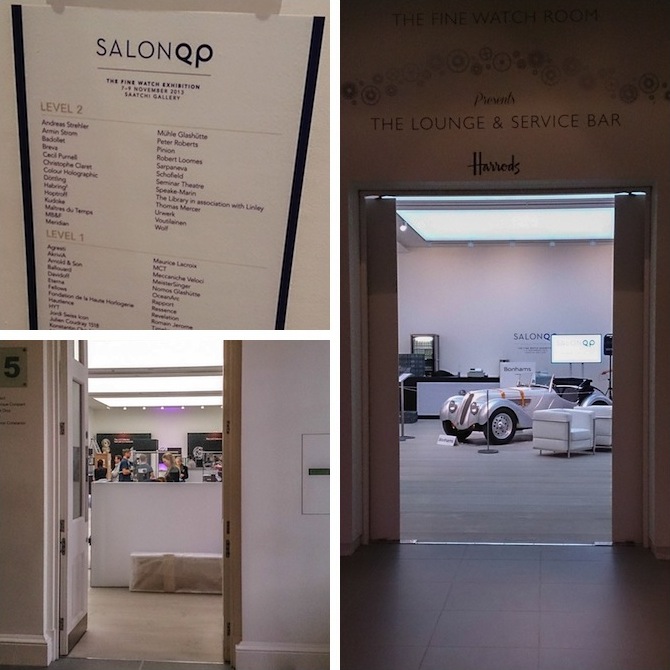 Part of the list of exhibitors placed just by the elevators; The Fine Watch Room with its main exhibition piece in the centre and another gallery still in construction. Exterior image of the gallery from Saatchi Gallery.

Before we begin to discuss the highlights of the show, allow me to briefly describe SalonQP for those who have not had the pleasure of attending before. It is an exhibition dedicated to fine watches and is hosted by the Saatchi Gallery in downtown London. This beautiful gallery was entirely reserved for all three days of the show and this meant that one could visit exhibitors on all three floors with booths set up in more than a dozen smaller and larger halls. The first of the three days was dedicated to an invitation-only VIP reception, held from 6pm until 10pm. Nonetheless, both following days were open to the public between noon and 6pm with tickets going for around £20 ($30) per day.

I will admit that just a few hours before the official opening I was still wondering how successful the following days were going to be, how many people would attend and how the exhibition will perform as an important forum that strives to bring watch making closer to its audience. Having said that, I never imagined anything quite like what it turned out to be. The interest for the opening night was beyond my boldest expectations! All three levels were packed with true watch aficionados and the occasional watch lovers, all of them tirelessly visiting exhibitors in every hall. Large crowds gathered around every booth as brands repeatedly presented their latest and greatest timepieces. Some brands tried to further enhance the night’s buzzing atmosphere. My absolute favorite of these efforts had to be the 1940’s band playing by the Bremont stand. Their lovely style lent a unique flair to the gallery while perfectly matching the British company and its showcased timepieces. 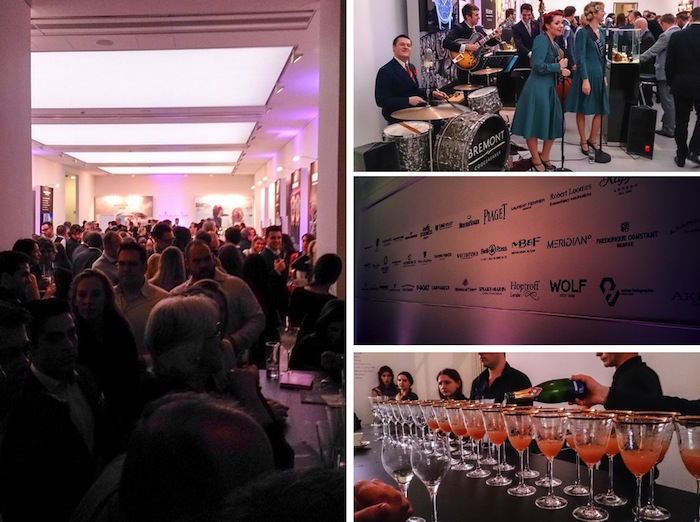 From a watch enthusiast’s perspective it was fantastic to see so many people attend and show such incredible interest for the event, for the brands and – most importantly – for watch making itself. For the longer term we have to find that the chance to see, study and experience watch making in much greater detail must be granted to an ever-growing audience. And this is where this show truly excelled. It provided visitors – of the public and journalists alike – equally easy access to all participating brands. What I mean by easy access is that throughout the event there was a chance of personally meeting several of one’s favorite brands and getting a more practical understanding of their background and their products as well. Thanks to the layout of the booths people could go up to meet the representatives of every exhibiting company and often personally meet the CEOs and/or founders of their favorite brands.

But the show offered even more than just that. A handful of minor and major companies chose to highlight one of the crafts that they practice in-house, hence providing visitors the special opportunity to experience some of the most amazing professions in high-end watch making. There were watch makers taking apart and assembling trademark movements of their manufactures, engravers creating special components as well as enamel dial painters and strap-makers. So let’s begin by discussing this blend of fine watch exhibitions and a few of watch making’s most challenging crafts. 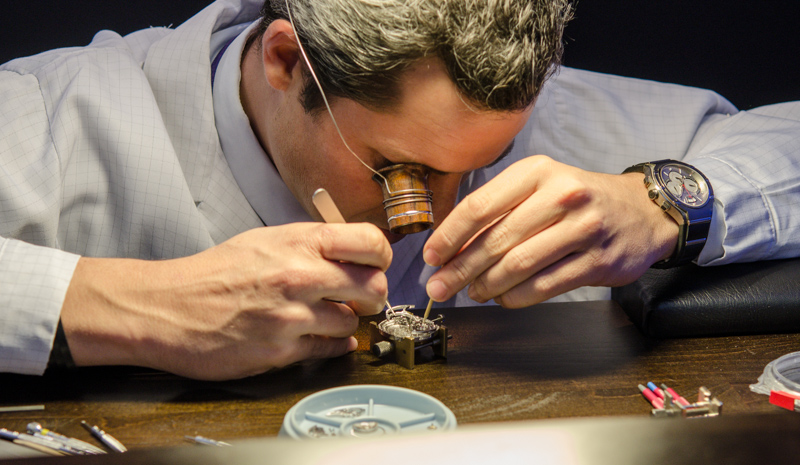 We will start with the watchmakers, the men who were working with unbelievable discipline and diligence in this noisy and tumbling environment. I am certain that every watch enthusiast will be familiar with that particular mixture of fascination, curiosity and amazement generated by the sight of a fine movement seen through a sapphire case back. At SalonQP some highly acknowledged movement manufacturing brands allowed visitors to get a much better view than any transparent case back would allow as they presented uncased examples of some of their most remarkable calibers. Piaget, Chopard and Zenith had set up benches with one of their master watchmakers working on one or more trademark movements of the manufactures, while Jaeger-LeCoultre hosted a public workshop with participation fees going to a charity organization. 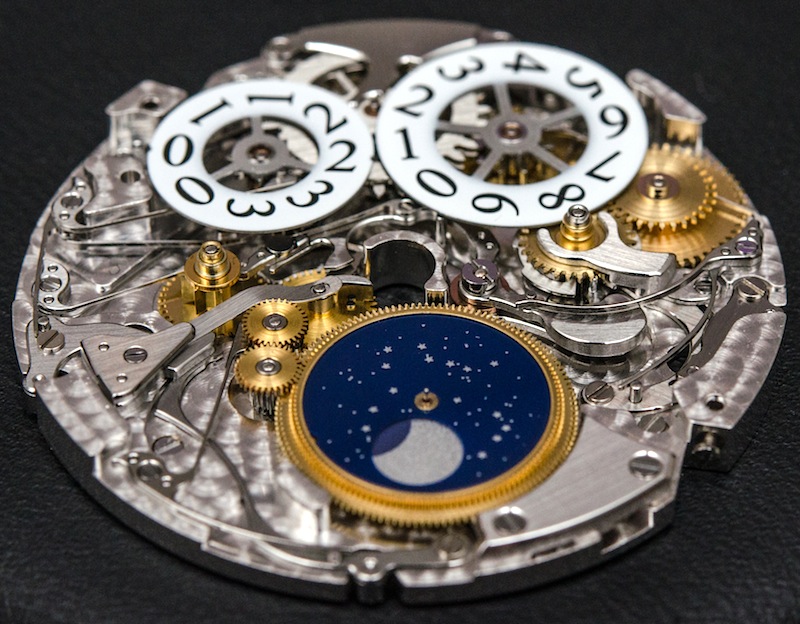 Attached to the case is among Jaquet Droz’s most excellent rolled alligator straps at a deep blue to match the aventurine on the dial. What I really like about the polished leather look is that there is no sewing on the surface, which I happen not to like in many instances – especially on more formal or dress watches. Restricted to only 28 bits, I’m rather fond of the pretty looks of the ref. My only remaining question is whether or not it would get a spot on my wrist… and so I said “possibly on the right night and under the right skies” (wow, which came out so French!) . He irony of this Jaquet Droz Watches For Sale Replica Grande Seconde Quantieme watch was that it was initially released in steel, as a lower-priced version for its high-end brand. This was back in 2011, and we provided a review of this steel Jaquet Droz Grande Second Quantieme watch here. For 2014, Jaquet Droz releases some new variations of the this “calendar” (quantieme) variant of its Grande Seconde view in gold as well as with enamel dials.More so, the 2014 Jaquet Droz Grande Seconde Quantieme Ivory Enamel watches feature brand-new moves which Jaquet Droz will use to help differentiate their timepieces. Jaquet Droz is a portion of the Swatch Group and obtained high-end moves from the group, but beginning with this new group, the movements will be a lot simpler with better specs and a better visual aesthetic.So let me begin by discussing the moves used at the Jaquet Droz Grande Seconde Quantieme Ivory Enamel watches. Both the larger and smaller diameter variations of this watch will have exactly the identical movement, which may have a automated rotor at a metal to match the situation (either 18k reddish or white gold). The motion is that the Jaquet Droz caliber 2660Q2. P automatic using a silicon hair spring and double power reserves. The ribbon is impressively nice and also the work on the automatic rotor is quite fantastic. This is really the direction Jaquet Droz needed to go in order to help rank not only their designs, but their movements for the high-end consumer.