The attendee list was controlled to 300 tastemakers, influencers, top-of-craft artisans, racers, and modifiers. The three day event would include long joy rides, flat track racing, Sons of Anarchy-esque convoy expeditions, an unconventional drag race, along with a secret window at which us “outlaws” can conceal and reminisce about the day’s tomfoolery.Vincent Prat and Paul d’Orleans were the organizers of Wheels and Waves California and lots of the motorcycle industry’s trendsetters and influencers were in attendance that afternoon including Jamie Robinson from MotoGeo, Roland Sands from RSD, as well as Steve Caballero, a world renowned pro skater, just to name a few. Brands like Alpinestar along with a ton of all-star modification garages were present as well, such as Deus ex Machina, Revival Cycles, Brat Style, and Suicide Machine Company, just to name a few.The event was tightly packed with all types of motorcycle “anti-racing.” Hurry day one was in the Santa Maria Raceway, where I would spend my hot day running across the dirt track, photographing and watching the Vintage and Super Hooligan horizontal track races. The sweltering sun required the race organizer to deploy the watering truck on the dirt trail to get it nice and slick to the races to come and boy were they sideways.Race day two had me roaring towards Santa Margarita, where I would embark on a private landing strip for Crooked Sprints. Drones above, the finish line banner dancing in the dry 105 degree weather. One by one, motorcycles would trickle onto the tacky hot tarmac. One hundred feet away, a decommissioned train on what appeared to be a railway going to nowhere turned into a shady refuge from the heat lamp over. However, more racers came, essentially piloting their custom creations, waiting for when the checkered flag would fall for them.

Launched at SIHH 2013, the Baume & Mercier Clifton 10057 triple calendar with moon phase is inspired by the complete calendar watches of the thirties and forties, right down to the traditional layout of the dial. 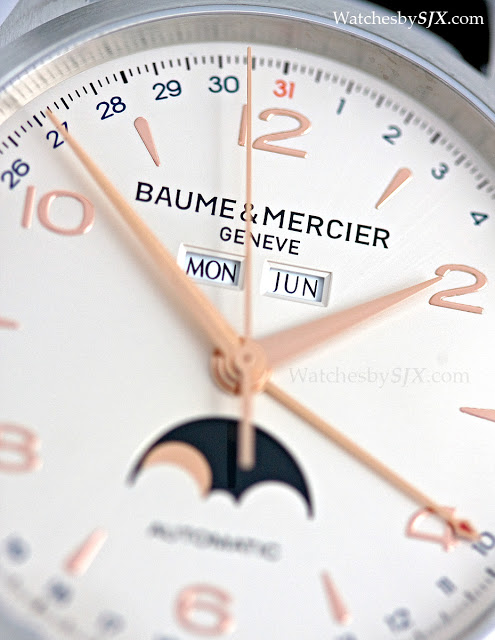 Baume & Mercier has leaned heavily on early to mid twentieth century wristwatches as it revamps its various watch lines. This is obvious in the Capeland chronographs, and likewise for the Clifton. The flagship of the Clifton collection, the Clifton 10057 is a traditional full calendar watch, indicating the day, date, month and moon phase. Though the 43 mm diameter is a distinctly modern size, the layout and styling of the watch is clearly vintage-inspired. All the calendar indications are legible, though a bit small relative to the size of the case and dial. The red-tipped pointer for the date on the perimeter for the dial is sometimes hard to catch because of its size. 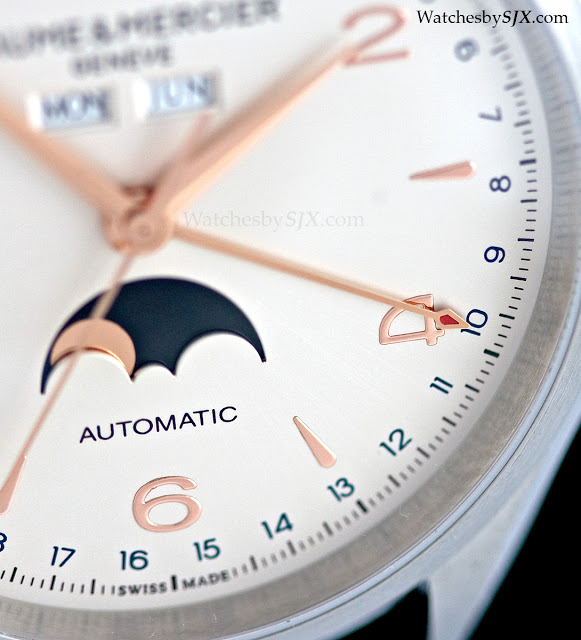 As with typical complete calendar watches, the calendar displays are adjusted via pushers in the sides of the case. And because the calendar is neither annual or perpetual, it has to be adjusted at the end of every month which does not have 31 days. Available in either dark blue or silver, the dial has a sunburst brushed finish, with stamped and plated numerals. 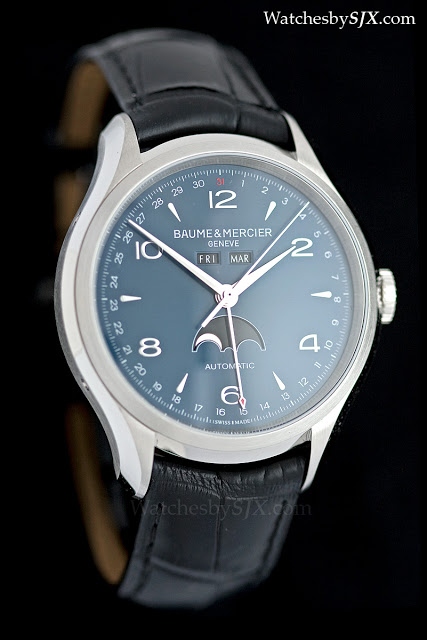 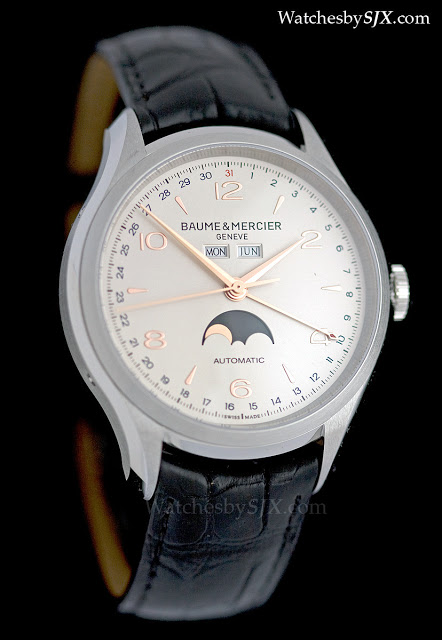 Inside is an ETA 2892 with the calendar module on top. The movement is decorated in a rudimentary manner, but the result is reasonably pleasing and suitable for the price range. 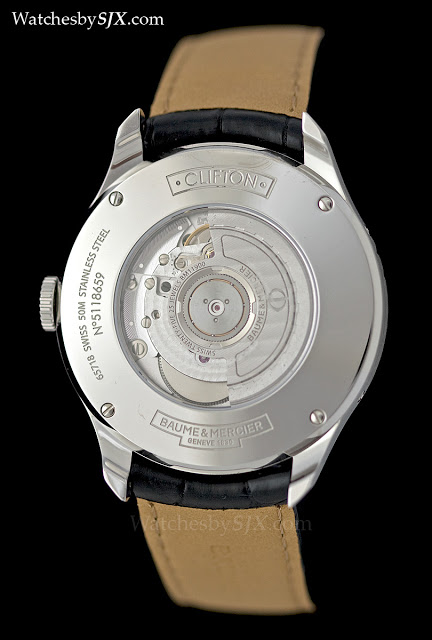 Of greater quality is the case, which has elegant curved lugs with a careful finish – brushed on the sides and top with a polished band in between. 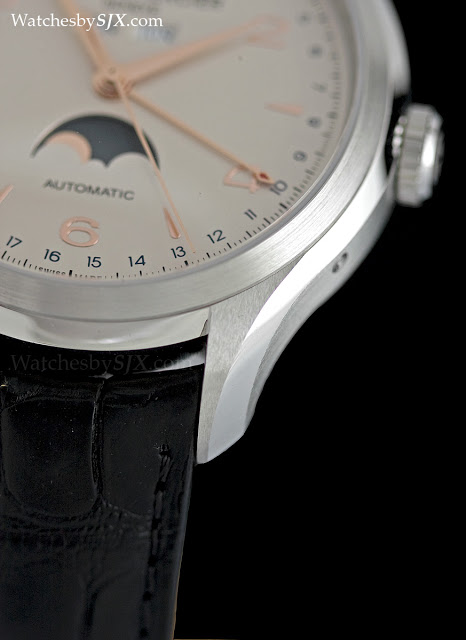 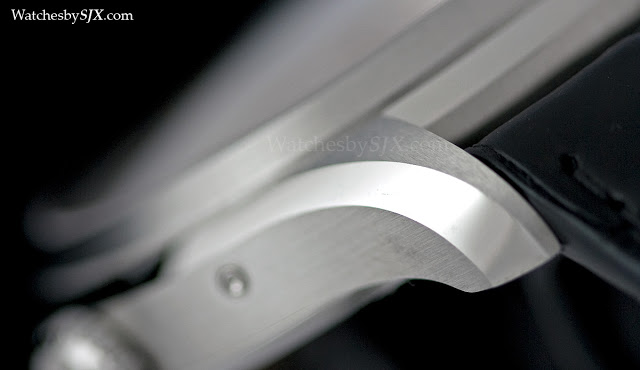 Though mechanically simple, the complete calendar is not a common complication. In fact, the pricier perpetual calendar is more easily found. Another notable complete calendar unveiled earlier this year is the Jaeger-LeCoultre Master Calendar.  Relative to the competition in this particular niche, the Clifton 10057 has the advantage of being accessibly priced, with a retail of US$4950 in the United States and S$6550 in Singapore. – SJX 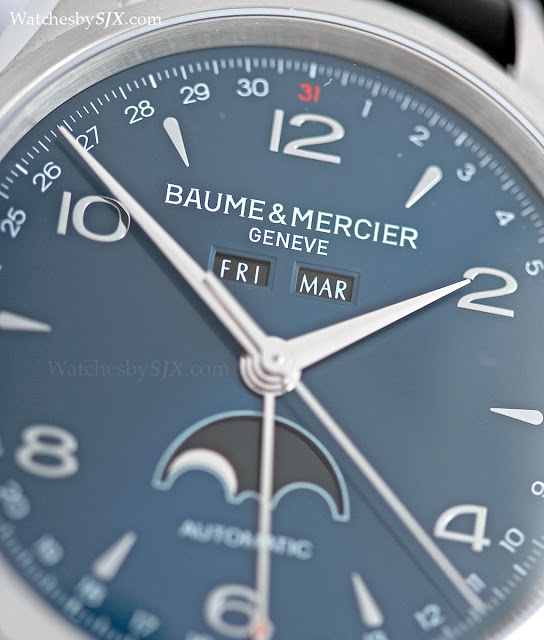 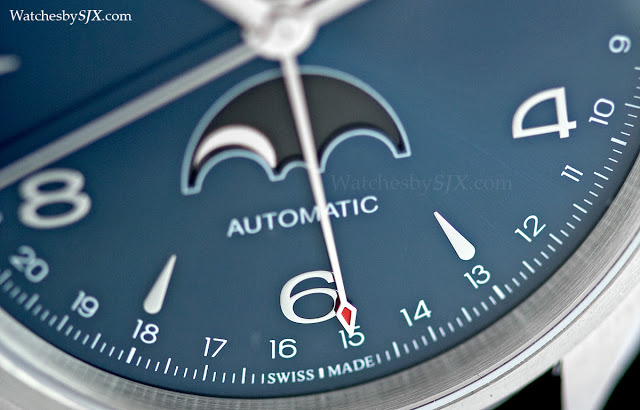