As Baume & Mercier’s signature semi-casual apparel watch, the classically resourceful Clifton can play host to some fairly vast array of complications — all from simple GMT and moonphase screens, to endless calendars and this wild minute-repeating pocket view. So it should come as little surprise for 2017, just as in years’ past, the entry-level Richmont brand is leaning onto the Clifton’s flexibility to showcase their latest technologies: an in-house made manual-winding movement equipped with an exclusive system meant to enhance accuracy.The Baume & Mercier Clifton Manual 1830 is the very first Richemont set watch to deploy this new technician, known as TwinSpir, which will be centered around a new kind of proprietary silicon hairspring developed by the Richemont Research & Innovation team. This new spring is comprised of a unique, composite structure that unites two layers of silicon, alternatively oriented and bound through a layer of carbon dioxide. The goal was to create a hairspring which wasn’t only immune to the typical consequences — corrosion, magnetism, etc., but one that was also largely resistant to changes in temperature and infinitesimal variances in tension while it oscillates.Now, calling TwinSpir the basis for a thermocompensated mechanical movement could be something of a gross oversimplification, however that isn’t far from the assumption, either. But, rather than actively adjust for changes in temperature, this system mutes them. By way of example, where a normal hairspring might show varying levels of elasticity (and therefore subtly differing oscillation rates) on the wrist to a warm day, vs. sitting on a bedside table, the fundamental premise of TwinSpir is to create a more consistently stable hairspring that’s largely immune from these types of thermoelastic variances regardless of the view’s ambient temperatures. Furthermore, since the hairspring expands and contracts through its normal oscillations, the layered arrangement was made to make a perfectly and more constant oscillation, eliminating any subtle irregularities in elasticity (or “elastic anisotropies”) that will also adversely influence the chronometric speed — a known functionality trait exhibited by many traditional hairsprings.

The new Clifton Perpetual Calendar from Baume & Mercier is a familiar one, given the popularity of accessibly priced perpetual calendars from the likes Frederique Constant, Montblanc and even Chopard L.U.C.

Priced at the equivalent of US$21,000, the Clifton Perpetual Calendar is red gold and a largish 41mm in diameter. With four sub-dials and a symmetrical layout, the dial is typical of watches featuring the common Dubois-Depraz 5100 perpetual calendar module. That’s the same module used by dozens of other perpetual calendar watches, including both the  Montblanc mentioned earlier. 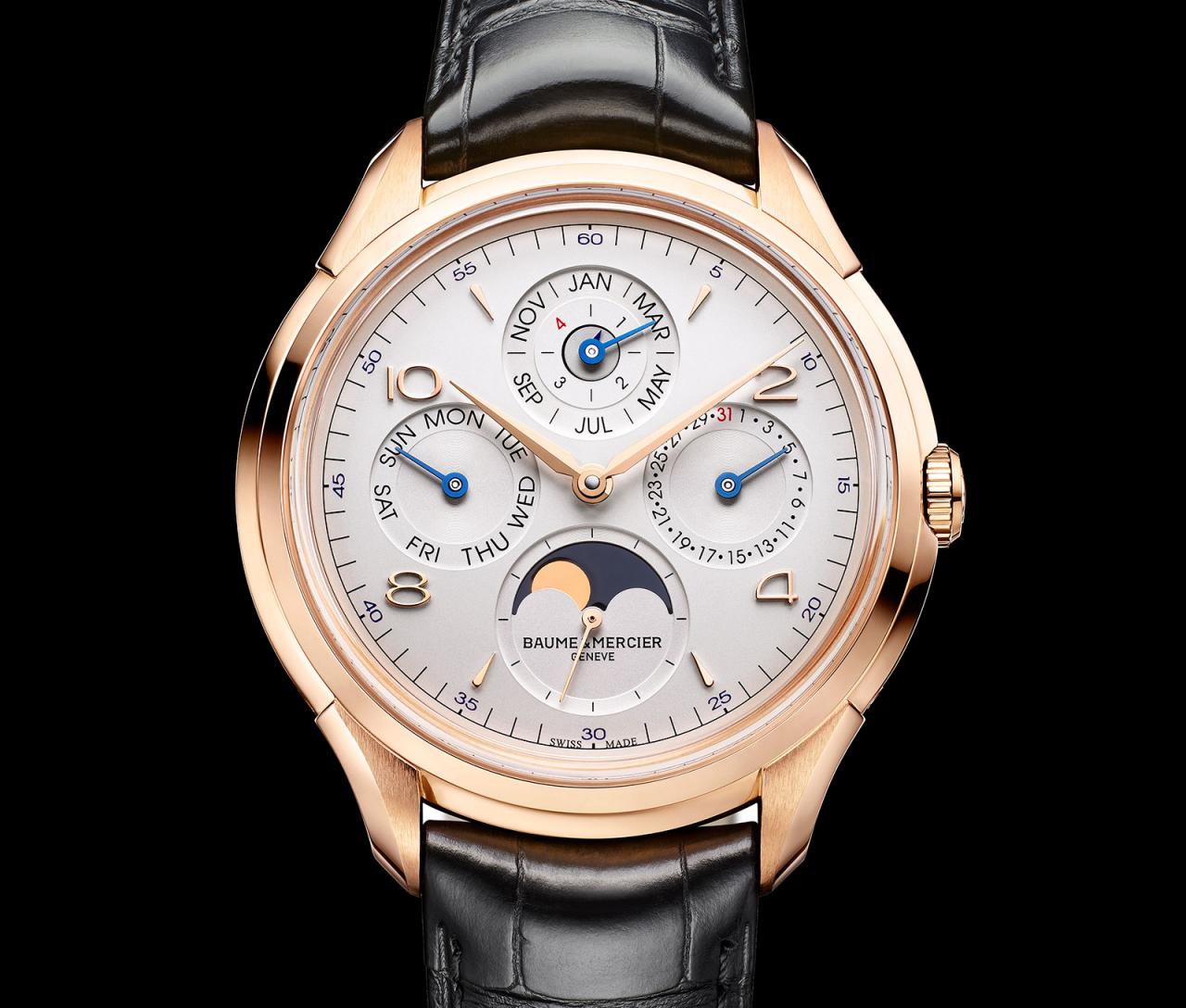 More unusual is the base movement, which is the Vaucher 5401. Visually distinctive with its bridge layout, the 5401 is a relatively slim and large automatic calibre with a micro-rotor from a movement maker that also supplies the likes of Richard Mille, Hermes and Parmigiani. Vaucher movements are respected, well executed, and pricey, consequently not usually found in gold watches at this price point – a big plus for this watch. 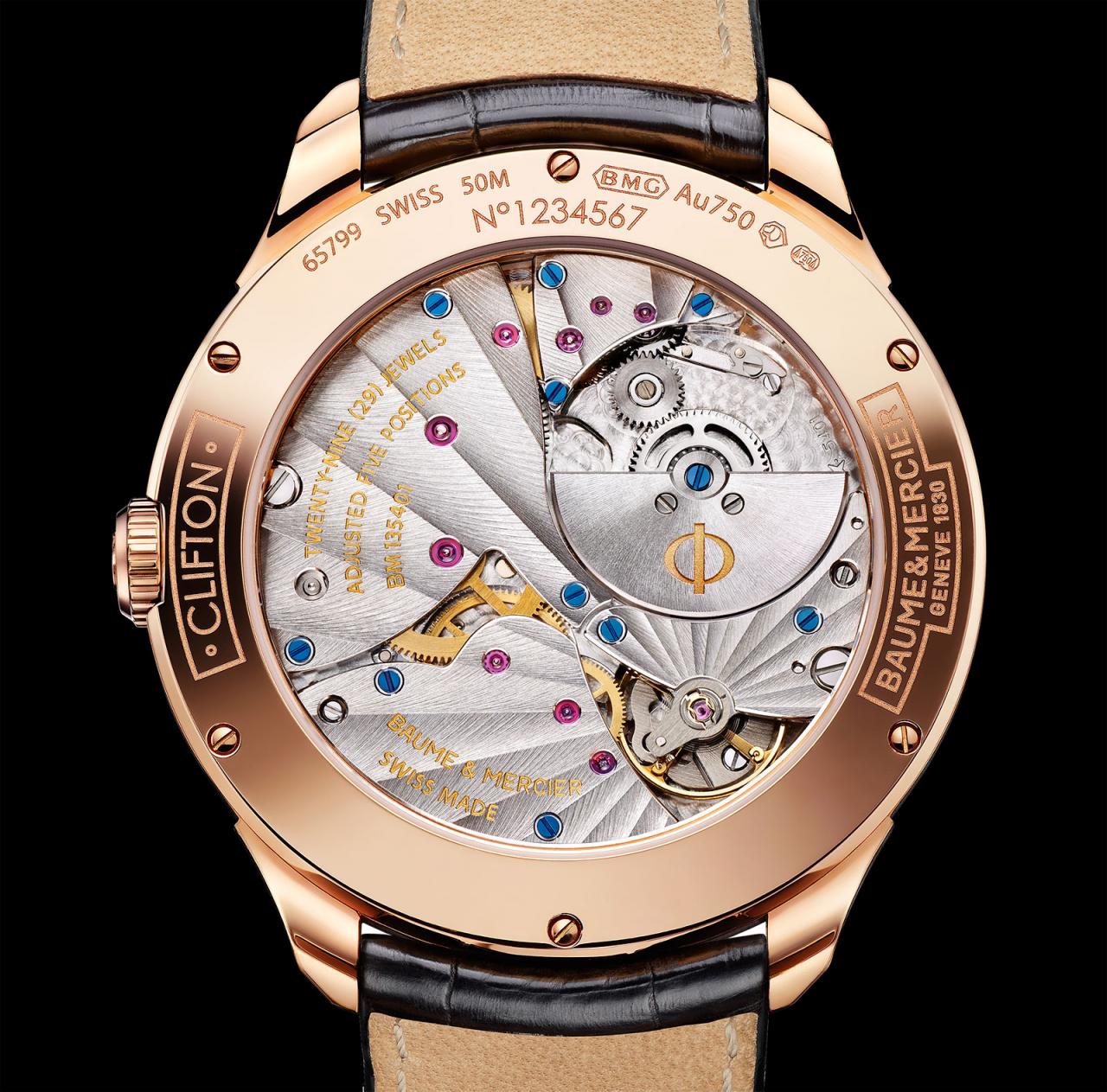 That makes the Clifton Perpetual Calendar an unusual proposition. Though Baume & Mercier has been working hard at moving upmarket with watches like the Clifton Flying Tourbillon and 8-Day Power Reserve – both powered by IWC movements no less – it is still a brand associated with more affordable watches.

Offered only in red gold for now – a stainless steel version surely can’t be far off – the Clifton Perpetual Calendar (ref. M0A10306)is priced at SFr20,800, equivalent to US$21,000. It’s available at Baume & Mercier retailers.

Correction October 14, 2016: The Frederique Constant perpetual calendar does not use the Dubois-Depraz 5100 calendar module as previously stated. Thanks to Frank Geelen of Monochrome for pointing it out.